Jonathan Timianko had neither boating nor coding experience when he first arrived at the idea for his tech startup. After his parents moved from the New York area down to a house on the water in Miami, Florida, Jonathan realized a huge opportunity in his parents' empty boat dock – and the idea for Piershare, an "AirBnB"-style rental platform for private dock spaces and mooring buoys, was born.

Jonathan created Piershare in 2016 using Bubble's no-code platform. Since then, he has run his business successfully without raising capital and without needing to write a single line of code.

"I cannot even begin to quantify how much money and time is saved by not needing a team of engineers or needing to go out to raise money so that we can build the next version of our product."

We sat down with Jonathan as he prepares to share his no-code expertise with YOU, in our latest Bubble Jumpstart program starting December 13.

New to the world of no-code? Learn from experienced entrepreneurs like Jonathan in our next Jumpstart Bootcamp!

What motivated you into becoming an entrepreneur?

My father was an entrepreneur who had his own carpeting and flooring business in New York. He came to this country with basically nothing, so I knew growing up that I always wanted to have my own business of some kind down the road. I have been a follower of all of the major tech blogs and companies since I was thirteen years old. On top of that, as would be typical of any teenager, I loved anything that moved – whether it be planes, cars, or boats.

However, I couldn't start a business right after graduating college. I ended up working for a technology consulting firm and then for a global accounting firm, doing economic research and international tax work.

What led you to founding your own company?

In 2016, while I was still living in New York working corporate jobs, my parents relocated to Miami, FL and bought a house on the water with a boat dock attached to it. Since we were from the Northeast, we didn't have a boat and the dock sat empty.

One day while I was in Florida on vacation, my dad's cousin called and said that he had a friend with a large motor yacht who desperately needed a dock for his boat, because the marina that kept his boat was undergoing repairs for a month. My dad had absolutely no boating experience or any idea about what he should charge for keeping this huge boat at his house for a month, and this offer really took him by surprise.

As the boat made its way down our canal and onto our family's dock, I had a realization. After spending years watching Shark Tank and writing down ideas on my iPad, I knew this was "the idea" that I had been looking for all along: what if there was a platform like Airbnb for boat docks?

It sounded crazy at first: why would someone want to keep their boat behind someone else's house, have to go through someone else's backyard to get to their own boat, and risk disturbing whoever lived there? Excitement for something with huge potential can be instantly tempered by the reality that the journey you're about to embark on is going to be long, hard, and full of obstacles you'll never see coming until they're right in front of you. But while most people would have shied away from these challenges, it was this mix of things that got me even more excited about it.

So that's how PierShare was born. In the midst of all of the uncertainty, I comforted myself by saying, "If AirBnB can launch a global business that revolves entirely around random strangers sleeping inside people's apartments, then I think that someone bringing a boat to someone else's backyard doesn't seem so far-fetched. Let's go for it!"

How did you start building your company with no-code?

Back when I had my idea in 2016, the term "no-code" did not exist. Everyone was still talking about the importance of learning how to code. New startups that wanted even a remote chance of succeeding were raising millions of dollars from investors to build their engineering teams, and the idea that one person could turn their idea into an entire tech platform by themselves was simply inconceivable.

I knew from working in Corporate America that the last thing I wanted to do was go to an investor to raise money, and then outsource the creation of my idea to a team of developers who had very little idea of how the product would work. This seemed so antithetical to me after having seen the American Dream that my father had created for himself. I wanted to chart my own path and explore and see where it led me. And I knew right away that I did not want to spend two years learning how to code.

I found Bubble by searching the internet for many combinations of the following phrase: "How to build a company like AirBnB but with existing software tools", or "How to extend an advanced website builder to create an AirBnB equivalent".

My Bubble journey began five years ago, and even though I have over 10,000 hours of development experience on the platform, in a weird way it feels like my Bubble journey and the no-code space by extension is just getting started. PierShare, no matter how big it ever gets, will never be moved off of Bubble and no-code tools. I cannot even begin to quantify how much money and time is saved by not needing a team of engineers or needing to go out to raise money so that we can build the next version of our product.

By mastering Bubble, I – or anyone else I eventually hire – can literally make any change I want to the way the product is built, at any time, essentially for free.

At the end of the day, in the bigger picture, words simply cannot describe how amazing it is to literally have all of the tools you need at your disposal to create whatever tech product you want, and make it as big as you want it to be, without having to answer to anyone else who may have a different agenda for your own idea.

Why are you teaching for Bubble's Bootcamps program?

I know there are tons of people out there who, like me in 2016, have ideas lurking around in their heads, but just don't know how to take that next step. I'm particularly excited to teach Bubble's Bootcamps because it will allow me to take everything I have learned through my Bubble journey and introduce it to others who perhaps don't quite know how to get started. Bubble is a community of builders that will collectively be greater than the sum of its individual parts. I'm so excited to be able to simultaneously continue building my product and help those who want to chart a similar journey.

What advice do you have for entrepreneurs?

The Bubble platform is the most powerful thing to come along in tech in a very long time. However, the platform will not build your business for you, so it is your job to use the tool to build your business yourself. Most importantly, the Bubble platform is never a substitute for interacting with your earliest users so that you can learn exactly what they want. Only until you fully understand what they want should you then go ahead and build it for them, and you should do it cautiously and with care. If you overbuild with too many features in the beginning, or build something that is not wanted, then the idea will not take off, regardless of how well it is built on Bubble.

So go out, get your hands dirty with your earliest users, and just have fun learning how to build in the beginning, and if you do those things consistently over time, and don't give up, you'll find out that great things will start happening for you, just like they have for me, so far. 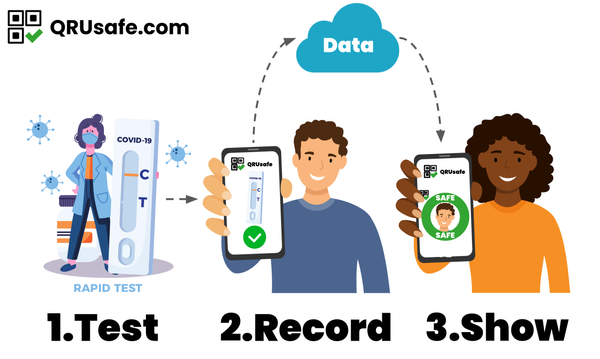 QRUsafe is a COVID safety and travel app that promotes safer experiences and places for people.

Collect All is an app that enables users to log their collections by tailored categories.