Kelly Claus, a former aspiring opera singer with a passion for exploring, built herself a branding and web design studio specializing in Wordpress and Webflow that let her operate from anywhere and travel the world. But it wasn't until she discovered Bubble's no-code platform that she found a tool powerful enough to serve her needs and community of welcoming learners to guide her. Now, Kelly is a graduate of the On Deck No-Code Fellowship and our newest Bubble Bootcamps instructor! We spoke to her more about her journey into the no-code community.

Join Kelly's Jumpstart Bootcamp and learn the foundations of Bubble and what made her successful.

Tell us more about yourself.

I grew up in Dallas, but spent most of my adult life in NYC. Almost 6 years ago, I left New York to travel full time, and I’ve been bopping around the world ever since. I had big plans to learn a language or two in my travels, but that pursuit has proven to be a massive failure, and instead, I’ve taken up the enthralling hobby of Eating Stuff I Would’ve Run From As A Kid. I travel with my partner Jeremy, and we’re hoping to move to Berlin in the next couple years where we intend to own some guitars and at least one tiny dog that won't make me sneeze. I might also get back to writing if I get the itch.

What did you do before you worked in no-code design and development?

In my younger years, I had dreams of becoming an opera singer and even got a masters degree in voice. But when I realized I needed health insurance and some actual income, I dropped all that and took an admin job at an opera company. My job was to teach little kids and Ladies Who Lunch about La Boheme, etc., but I was feeling that mid-20s drive to make a bigger impact, so I moved to New York to work with teenagers.

For about 9 years, I served as Operations Director for an organization that produced original theater by, about, and starring young people. In that time, I produced more than 20 Off-Broadway musicals, built countless systems to manage “all the stuff,” and - by happenstance - picked up some design skills. Because I could do that kind of work remotely and I wanted to travel, I learned Wordpress and then Webflow. I pretty quickly built up a thriving little branding and web design studio that I could operate from anywhere.

While that was lovely for a while, I knew design wasn’t 100% "it” for me, and had been hunting for new focus when I discovered Bubble. Now, less than a year later, I’m working in Bubble full time, building for myself and for others, and of course, teaching.

For years, I had been trying to build a tool to help grant writers simplify their workflow. I had tried so many other platforms that were almost there, but not quite powerful enough for what I needed. At some point, I stumbled upon a Bubble tutorial by Gregory John, and within about 5 minutes, it was clear that this platform was exactly what I was looking for. I joined Max Haining’s 100 Days of No Code, and then On Deck’s No Code Fellowship, and ended up building a meaty little Bubble app called Rote, which is now in Beta.

Why did you choose to build with no-code?

No-code really is the only reasonable option for someone like myself, who wants to build something complex, but doesn’t have the time to learn to code, or big bags of cash to hire an engineer. With Bubble, I can build exactly what I want, super fast, all on my own, for basically free.

It’s not just efficiency though; Bubble allows me to take each of the disparate skills I’ve picked up in my career, and use them all at once. My design brain finally gets to play with my systems brain, and honestly it’s so fun, it’s hard to sleep some nights.

What do you enjoy most about teaching Bubble Bootcamps?

For pretty much my entire design career, I learned on my own. It was lonely and terrifying, and so slow. When I started learning Bubble, the first thing I did was find a community of people who were also learning. It made such a massive difference to have peers in the process. I learned so much faster, and have made some incredible friends.

That’s the thing that gets me most sappy and excited as a Bootcamps instructor. Teaching the platform is great, yes, but bringing people into this community, and providing an entry point to expand their worlds a little -- that part is pure gold.

If you had one piece of advice to entrepreneurs, what would it be?

I'm probably biased here, but I truly believe that a solid grasp of design fundamentals is one of the most valuable skills a builder can have. A couple of Udemy courses won't replace a professional designer if you're looking to monetize and scale, but a little knowledge and some practice can go a long way in creating an app people are actually happy to use. Plus, building is just way more fun when the thing you're making doesn't look like a turd.

Learn from Kelly and how she builds on Bubble in our Bubble Bootcamps program. 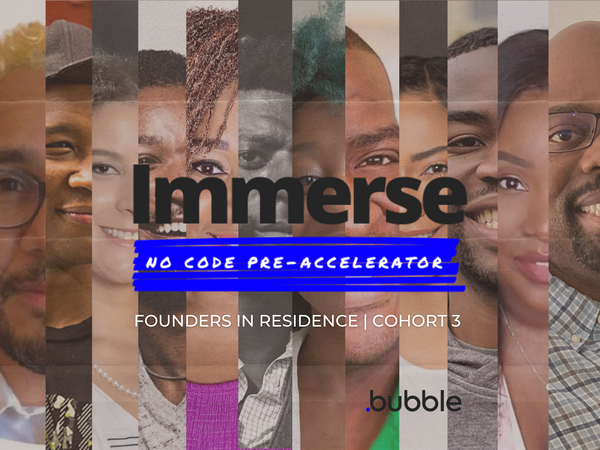