When the coronavirus crisis first hit, it staggered the global economy and healthcare systems. Local businesses suffered from mandatory shutdowns and economic upheaval. Everyone needed some kind of help. And people and governments needed to move fast to respond quickly to the crisis.

Brent Summers, a developer and proponent of no-code software tools, was always a man of action. Rather than attempt to start a COVID-response project with an expensive team of developers, he decided to build a fully-fledged web app that let people buy digital gift cards to struggling local businesses. He worked on the project with his co-founder Justin Mares, but they built the app without writing code.

They built their small business gift card app, GiveLocal, using Bubble. They launched their app on March 15, 2020 after only three days of building. Within just one week, GiveLocal was acquired by USA Today and is now known as “Support Local.”

Why Build With No-Code?

No-code software tools allow people to take their ideas from MVP to fully-fledged web apps and startups in little time and at low cost. Summers is just one of many users who realized early on that no-code had the potential to revolutionize the way startups are founded.

“I got started with no-code probably in early 2014,” explained Summers. “At the time, I was seeing a lot of friction between these non-technical founders working with a limited budget and also limited technical knowhow, trying to talk to developers and development teams.”

“Everyone knows the story of the startup founder who goes out with $10,000,” Summers told us. “They have an idea, hire a dev team from Upwork or somewhere outsourced. But you know, the product comes back. They then try to go back for changes. The dev team either disappears or jacks up the rates.”

RELATED: Don't waste your time trying to outsource your development. Sign up for Bubble and become your own CTO.

Hearing those accumulated negative experiences led Summers to Bubble and other no-code tools. He believed in an idea that ran contrary to popular opinion at the time, six years ago: that learning code wasn’t necessary for building a good tech product.

No-code platforms like Bubble use drag-and-drop visual workflows to help people capture their business logic without requiring them to write code. For anyone with a programming background or even advanced Excel knowledge, no-code can also dramatically reduce production time. This became critical during the COVID-19 pandemic, and remains important in the face of ongoing crises.

“When push comes to shove and people are forced to prioritize function and simplicity over complicated product flows, when speed is of the essence and when everybody wants to have the ability to contribute to the solution, then no-code becomes a no-brainer.” - Samuel Baddoo, Bubble user

Summers used this speed to his advantage during the coronavirus crisis. He and Mares spent three days working on the app and then posted it onto social media. Within the first two days of launch, Summers got an “overwhelming response” from his community.

“The thing that makes no-code so powerful is the speed of development,” Summers said. “The number one mistake I see first time entrepreneurs make is they don’t use speed in the right way. They spend months fiddling with their app because they want to get it perfect before launching. I used Bubble’s speed to actually get that advantage when it comes to getting something out there fast.”

What happened next was surprising and rare, especially during a pandemic.

By day four after launching, Summers said they were approached by a number of different companies that offered to help.

“One of them was Gannett, owner of USA Today,” he explained. “They said they were working on something similar and said they would love to join forces. It was an easy decision because they had both engineers that were familiar with Bubble and the biggest reach of daily circulation newspapers.”

Summers explained that he and his co-founder work on other full-time projects and were already struggling to keep up with user feedback. The USA Today team took over the site, migrated it to version two, and added functionality including delivery options for some restaurants and an elastic search feature. Summers now advises the team and continues to spread the word about supporting local businesses.

Summers chose to build without code because he knew it was faster to launch with the resources he had at his disposal. No-code tools have become more powerful, more robust, and more customizable in the past decade, and are poised to become the main way entrepreneurs get their start. Forrester predicted that the no-code development platform market will grow to $21.2 billion in 2022, and Gartner expects that low-code application platforms will account for 65 percent of all app development by 2024.

With the ongoing economic and political upheaval, we are going to see more non-technical people looking for ways to engage with social issues and create tech-enabled solutions. It’s more important now than ever that the ability to build software is accessible to everyone. No-code is the key to a more equal tech future.

Bubble is a leader in the no-code movement. Bubble offers a powerful point-and-click web editor and cloud hosting platform that allows users to build fully customizable web applications and workflows, ranging from simple prototypes to complex marketplaces, SaaS products, and more. Over 600,000 users are currently building and launching businesses on Bubble - many have gone on to participate in top accelerator programs, such as Y Combinator, and even raise $365M in venture funding. Bubble is more than just a product. We are a strong community of builders and entrepreneurs that are united by the belief that everyone should be able to create technology. 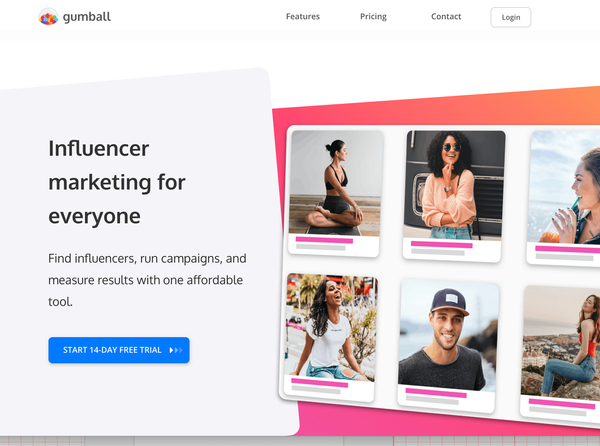 Gumball helps brands manage and track the success of their influencer marketing campaigns.