So, you’ve never heard of Bubble.

If you’ve wanted to build an app, launch a startup, or simply express an idea on the web – but you’re not an engineer and you don’t know how to code — two guys in a coffee shop have dedicated the last three years of their life to bridge that gap.

Emmanuel Straschnov and Josh Haas have built a platform that generates the code underneath your design, allowing you to program applications in the browser without needing to write any code.

And you shouldn’t have to.

If you work in fashion, you’re thinking about your design or your retail strategy. If you’re going to culinary school, you’re improving your recipes. If you’re a doctor, you’re spending time with your patients. Your focus is on your passion — where it should be.

But until now there have only been two ways to take your passion and build a web application or start an online business: 1) learn to code or 2) hire people who know how to code. The former is a huge knowledge gap for non-engineers; the latter is very expensive.

The first revolutionary thing Apple and Microsoft did was make computing accessible to everyone. They abstracted away the command line by providing a highly intuitive and visual interface. Then they gave us a mouse and keyboard to type and click to make the computer do what we want it to.

Coding, however, still looks very much like it did 50 years ago.

Yes, things have become easier. Programming languages have become more abstract, open source facilitates collaboration, and communities like Stack Overflow help learning. But at the end of the day, the coding process is still typing highly structured text (code) into a text editor in a way that the computer can understand.

But since we’re the ones building the computers, isn’t it reasonable to expect the computers to begin understanding the languages we already speak?

That’s Bubble’s vision. 50 years from now, I can’t imagine people programming as we do today. It just can’t be. The future is a world where programming is self-explanatory; where people talk to computers to build software. To get there, programming tools first need to begin using our language. To turn a button red, we shouldn’t have to write code — we should be able to point to the button and select a shade of red.

A core belief of the founding team is that coding and programming should be two different things. They’re currently synonymous because, to put it simply, if you want to program an application you have to write the code to do it.

But wouldn’t you agree there’s a fundamental difference between understanding how an application should function {programming} and how to write the code? For example, we all understand that hitting the “post” button on Facebook will share our thoughts. And if we were programming an app of our own, we’d all be able to say “put a blue button here that says ‘post’ and when it’s clicked share whatever’s written in the text box.” Well, that’s exactly how Bubble let’s you build.

Because what deters most people from innovating online is not the programming; many people already have a very solid understanding of how applications should work and look like. We use them in our everyday lives for everything from socializing to working, so the learning curve is minimal.

The guys at Bubble claim that if you complete the 9 lessons they currently have available on their website, which should take about a week’s time, you will have enough familiarity with the platform to start building applications visually. For a first-time user that may be ambitious; but it’s certainly reasonable that within a couple month’s you’ll be able to build apps that would take years of training if you were to code them.

Because if you’re building a web app with a Ruby backend, then you have to worry about sending data from the server to the client, talking to a database, the way web browsers translate html and css into your user interface, asynchronous vs synchronous event code, and much more.

That’s all built in with Bubble, which allows non-technical people to start innovating online. “The reason Facebook took off on college campuses was because it was built for students by a student; the best ideas come about when you’re building something for your peers,” says Emmanuel. “Mark Zuckerberg happened to know how to code, so he was able to build it. If Bubble had existed back then, any student could have built Facebook.”

Squarespace and other template-based content management systems are great for templated websites that are simple and consist primarily of static content. If you want to have a blog or portfolio on the web, using Squarespace or Wordpress are ideal solutions. Hell, you can even splurge on a paid template and have a different look and feel than 80% of your peers.

But it doesn’t compare to the functionality or customizability offered with Bubble. You could not build AirBnB or Facebook on Squarespace — you very reasonably could do so on Bubble, and very quickly.

Vladimir Leytus, an MBA graduate with little prior coding experience, was able to clone Twitter in four days [see: NotRealTwitter]. To see Bubble in action, here’s a quick example of building the Tweet functionality.

1) Within the design tab, you design the interface of your app visually, by dragging and dropping. In this case, we want to build a popup with an input and a tweet button.

2) Next, you set a condition that changes the color of the text to red when the number of characters exceeds 140 characters.

3) Finally, program your app with workflows, e.g. “when the button Tweet is clicked → create a new tweet, wipe the content of the input, and hide the popup.”

As you can see, there’s still a bit of work to build something that appears simple to the end user, like sending off a Tweet. But understanding the flow of a user’s actions will come naturally, making the learning curve for Bubble very small in comparison to having to code.

The Future with Bubble

Bubble is building a revolutionary platform that will significantly reduce the time engineers spend reinventing the wheel into applications for people who don’t know how to do it for themselves. Instead, engineers could spend their time building libraries to a new standard, integrating them into platforms like Bubble for everyone to use. Coders will still write the code in terms of new widgets, plugins, and features — and if it’s necessary to dropdown to a lower-level language like Javascript in order to tweak things, then that will always be an option.

But in general it won’t be necessary. And we expect this to greatly increase the rate at which new ideas are born. People who don’t code will be able to express themselves online while ensuring the code underneath is built by experts; and the people who do code will now focus the majority of their time on new products and features.

This all may still sound outlandish: to claim that you can build and scale the next AirBnB without any coding skills. But if you’ve read this far, it means you’re at least interested enough to give it a try.*

“Instead of being consumers of technology, people will produce it,” says Josh. “This will unleash tremendous economic potential, as the number of people able to build new products and companies will skyrocket. It will create new jobs and opportunities for more people. It will also be extraordinarily empowering to enable people to build their own solutions to their own problems. That’s why making programming accessible to everyone is an incredible opportunity.”

Now that you know about Bubble, what will you build? 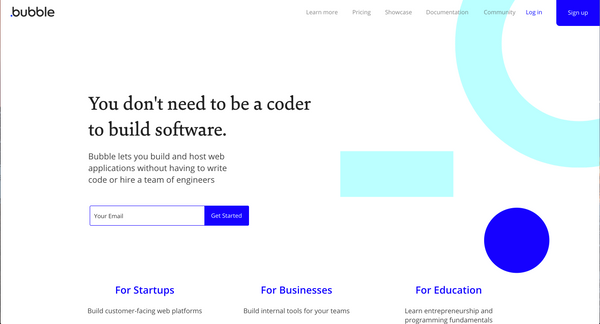 Where does Bubble fit among traditional programming languages? 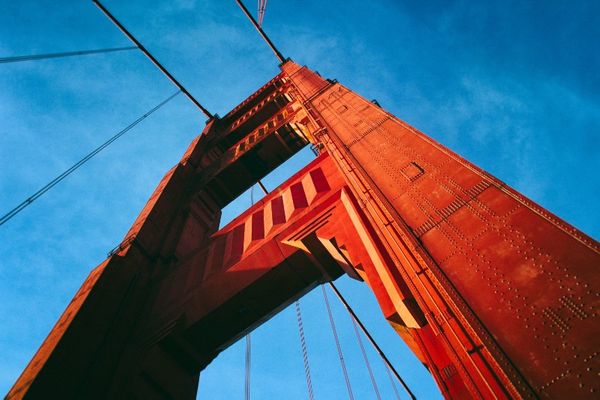 Yes, what we’re trying to do at Bubble is solve a hard problem. But why should it be impossible?